So I got tons of knitting and crocheting done, yeah!

First of all I knitted Alan Dart's Chick and Egg (pictured left). There is a bit of a story behind that which was brought to my attention through none other than Alan Dart himself. A young father had contacted Alan has his 3 yr old had lost the knitted chick his mother gave him. Unfortunately the little guy's mom passed away. I thought about it and checked my yarn stash and found I had the exact same colors, not the same thinkness as Alan uses DK (double knit/sport weight) yarn. The colors I found were in a Worsted Weight yarn, which is almost standard here in Canada. It is easier to get a hold of WW as opposed to DK. So it took me a bit, had the pieces knitted, just needed to sew the pieces together. So here are the pics.

So the second thing I got accomplished was crocheting some Sock Monkey ornaments (original shown on the left) for my co-workers.  I work at Nygard Fashions in Mayfield Commons. The women I work with are the greatest. I had been trying to figure out what to give them as a Christmas gift and the one thing was  that they loved the little toys I had been showing them. When Red Heart Yarns kept showing the Sock Monkey Ornaments, featured in their 12 weeks of Christmas, on Facebook (http://www.facebook.com/#!/redheartyarns) and on twitter (http://twitter.com/#!/RedHeartYarns), I just knew that I had to crochet them. So I got them finished yesterday, just in time to take to work yesterday evening. Everyone loved their gifts. 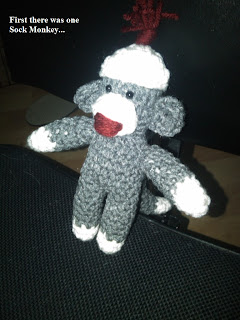 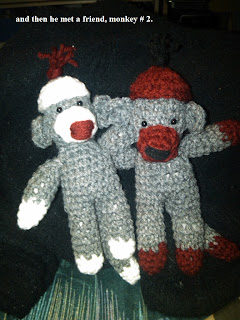 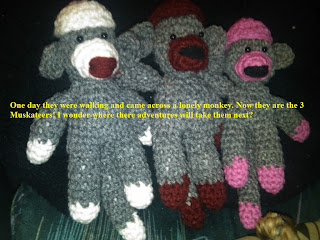 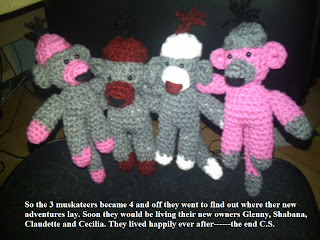 Hope you enjoyed the little story!


Have a Merry Christmas and a Happy and Safe New Year!
Cora