Sorry it has been a while...so much going on!

Well I started a new job. I had the first interview 2 weeks ago which was a fluke in and of itself. I had gone to the Telus kiosk (run by Smart Communications) in city centre to replace my step-son's cell phone which had the screen busted and when you text as much as he does you really do need the screen. So it was time to get another one. This time I made sure there was a manufactures warranty and one that could be used after a year. We pay $7 a month for it but the replacement cost is way cheaper than having to buy a new phone. So while we were talking I found out the gentleman (David) is a manager of several locations. So I flippantly asked if they were looking for people...turns out the were and to send in my resume. So I did.

I had a second interview on July 29 at 2:00. This also happened to be the day we had the BT Promo for Wienerama, so I had been up since 5:30 am to do the show. Leo did very well that day. He loved socializing with other doxies. I wasn't sure what to think of how the interview went, Michelle and I talked for an hour or so. The office I was being interviewed at was being renovated so Michelle was having issues find things so I kinda started blathering about dogs and the show, etc. So I was told I wouldn't know until Friday by 5. I was on pins and needles waiting for that call let me tell you!

So the upshot was that I got the job, not the one I originally applied for, but I got. So I work at the Optik Lounge in Southgate. Here is what is says on the Southgate job board.


We have opened a brand new concept to showcase Optik TV called the Optik Lounge.  The goal of the Optik Lounge Project is to create an opportunity for potential and existing Optik TV clients to experience Optik TV.  It has been installed in Southgate Centre and will be open  for at least 6 months.

General Objectives:  Maximize TELUS Optik TV brand awareness.  Showcase Optik TV and how it is light years ahead of cable.  Attract new clients and retain existing valuable clients.  Create a competitive differentiator for TELUS Optik TV.  Convert the “experience” into a sale at the nearby store.

I work with some amazing people and Troy, the manager is amazing! I am just hoping my voice lasts as I hadn't realized how much talking there actually is...lol.

On the knitting front I have finished some really cute test knits and patterns. In no particular order.... 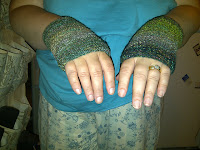 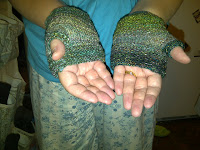 Some Rebecca Danger Designs as well. I had a bit of fun with one of them...lol.


1)This is Toothy Joe-The Mailbox Monster.

He is available in the Big Book of Monsters. He is a very simple knitting project and I learned how to use the magic loop method of knitting on this project. Not sure why I was scared of it...it is easy peasy to do ;D

She is one of 3 Rebecca Danger designs in the magazine. I actually knitted 2 of these in 3 days...new record for me. She turned out awesome.


Now I am onto 2 test knits, one is fingerless gloves (Macrocystis Mitts

) using Noro Kureyon and the other is a knit toy for yarnmiracle (aka Emily Ivey). You can find Emily at website (http://yarnmiracle.com) or on Ravelry at YarnMiracle at her Etsy Shop: yarnmiracle or on twitter: emilyivey.

Gotta run, blogging is cutting into my knitting time.