So Da Camara Singers performed with Procol Harum (http://www.procolharum.com/) and the ESO (Edmonton Symphony Orchestra) November 9 and 10, 2010.  It was sold out both night. My husband is a member of Da Camara Singers.  This is the information from the program and yes, hubby got autographs.


This is the song set:


Homburg
Shine on Brightly
Grand Hotel
Simple Sister
Mr Blue Day (Gary at microphone, Josh at piano)
Whaling Stores
Something Magic
A Salty Dog (in honour of Remembrance Day and others that look down from above) 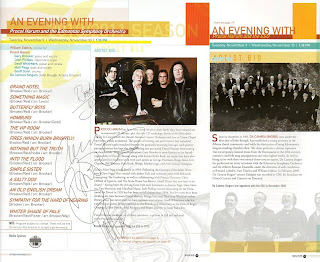 So anyways I end up backstage to meet with hubby and we get invited to an exclusive party for those that have been invited. So here I am backstage and I get to meet the member of Procol Harum and then I see Gord Steinke from Global Edmonton News. I also got to me his wife who is just the sweetest lady.
We spent about an hour with Josh just talking keyboards, Macs and iPhones. He is such a personable character. It was an amazing and surreal time...wow! Josh is one of hubbies keyboardist heroes.  The band was also teasing DH for have a 3 GS iPhone instead of a 4 GS one...too funny :-)
We also got to spend some time with Gary Brooker and the rest of the band as well.
DH got some time to talk with the drummer, Geoff Dunn about issues helping his son with his drumming as he is ambidextrous and has had issues with crossing his arms to play. So they are talking technique in these photos.
We did gat a chance ot speak with Matt Pegg and his father who was in the original Procol Harem, Dave Pegg.
All in all a great night! I do have other pictures however I decided not to post them.
Cora