So it has been a very interesting and sad week...

Last Saturday, DH and I were at Avenue goes to the Dogs. it is a yearly event and one that started as a germ of an idea by members of a working group for the Alberta Avenue Revitalization.  One of the the things I love about the day is you get to meet the many dogs that are staying with rescue groups. H.A.R.T. - Humane Animal Rescue Team and PAWS for Life were there along with many other groups that are interested in dog safety and care. 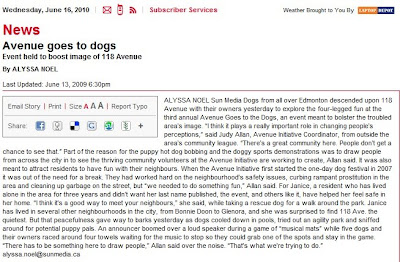 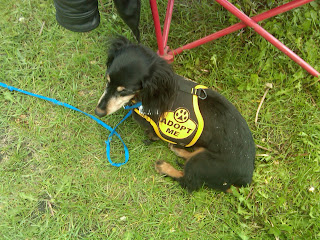 So DH, he is the "booming voice" the report speaks about in the above article, was hired to sound and some MC'ing as that is what he does when he is not doing his day jobs as Systems Analyst. All was going well. I was looking at dogs and petting them, running errands, etc. I bumped into a lady that I know from the community, from volunteering on the events and from the revitalization. I saw this adorable puppy, well not really a puppy...lol.  His name is Leo and he is actually a senior-9 years old. I petted him while Joanne and I spoke and then I headed back to where hubby was sitting. I was telling him about the dog, there was just something about him...you know? What I didn't know was that DH had been looking at the same dog, talk about a connection between us, eh? 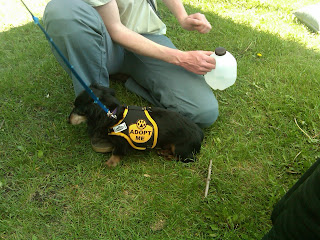 So Joanne stopped by where we were at the other end of the park. Well Leo plopped himself by me and after a couple of minutes, laid down and showed me his belly, he wanted a belly rub. Which I realized was very important..it is a trust thing after all. DH was busy trying to dunk his "boss" in the water tank that Joanne took Leo for a bit of walk as he had had enough. It was 3 in the afternoon and he was tired, overstimulated and over socialized. So he was getting a bit snappy. So DH fianlly got Nicole dunked and he was happy. So he came back to sit, Joanne came back with Leo and he did the same thing to DH. He just loved us, sat with us even as Joanne walked away, not too far though.  He did well!

So the jist of this is that we are looking at adopting him.  He has been at PAWS for a year now and really needs a forever home. I was surprised when I heard that! We have an appointment on Friday at 6 to do the meet and greet. One of the things that we will be discussing is how to integrate him in our primarily feline home.

So these are our feline babies, Tyger, Smokey, Snowball and Patches. 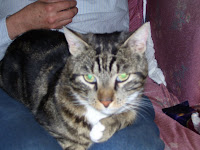 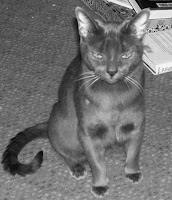 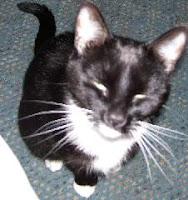 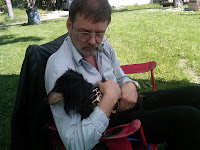 Can't you see Leo fitting in with this household? I know I can...

As for the sad part, DH's mother passed away on Monday night, we found out yesterday. It was only recently we found out that she had not one but two heart attacks. Now Faye was 90 however it still was a shock. So we are off to Ontario to attend the service this weekend. The service is Monday. So it has been a tough time for all.  I will try to keep you all posted as things happen.