A few years ago, Bookishgirl Wendy wrote here about throwing up the Knit-signal when you needed the knitting community. She said that she thought it was like Commissioner Gordon throwing up the Bat Signal when Gotham needed Batman.  She imagined that if we had a Knit-signal, we could use it when we needed to call our knit-posse, and she created this.   It was a good idea then, and it's useful today. 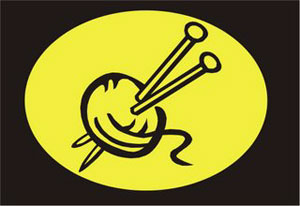 As I'm sure most of you know by now, yesterday, while we knit, ate, drank and slept - a massive earthquake struck Haiti, largely effecting the city of Port au Prince.  Haiti itself is a very poor country with other problems - and that means two things.  (Well. It means a lot of things actually, but lets only dwell on two of them at the moment.)  First, it means that they entirely lack the ability to respond to this emergency without a lot of help, and secondly, it means that when the quake struck, Doctors Without Borders/ Médecins Sans Frontières was already there.

While you and I knit and we (or at least me) considered problems that now seem rather trivial, there are suddenly dead people, hurt people, trapped people, lost people and  hundreds of thousands of homeless - all struggling to figure out what comes next.  I spoke briefly on the phone this morning with the MSF office here in Toronto, and they confirmed several things.

The MSF Hospital has sustained damage that means it isn't functioning as a hospital right now. Staff have moved to the courtyard and set up tents and what materials they could retrieve from the building and are doing their best to help people as they can. Doctors who were providing maternity care are now running a trauma centre.

They, and their sister offices in other countries spent all night figuring out who could go and how to get them there, and staff is packing as we read this to get there as fast as they can.  They'll be taking inflatable surgery suites with them so they can use that instead of their damaged buildings.

They believe that some of their staff are among the casualties.

They recognize the power of Knitters Without Borders and the force that we can marshal in a pinch,  and they are grateful that you've been able to help them in the past,  and  they would very much like your help now, and right away.

There are directed donation sites set up for Haiti on all of their websites, but I'd like to take a moment to ask you to please make your donation "undirected".   Money given to a specific fund can only be used for that area and making sure your donation is undirected helps them a lot.  It lets them keep serving other crises that continue to happen while the world watches Haiti, and more importantly, it allows them to be first responders.

On their websites (Canada here, USA here, Other countries can find their site here) when you give there is a drop-down menu that you'll see called "I would like my gift to be directed to..."  and you'll see a lot of choices.  Please consider selecting "Greatest Needs" or "Emergency Relief" so that they can have the flexibility that they need to do their best work.

I'm going right now to give my share, and I know from my inbox that many of you have already done the same.   Really, it's pretty hard to sit here with a Bohus, a pot of coffee, a laptop and this much sock yarn and do otherwise.  I hope you feel the same way.  They need you knitters,  I hope you can help, even if it's only a few dollars of your yarn money.

I'm going to go and keep the Knitters without borders tally running, since it's a tangible way to see how donations, even little ones,  add up like stitches on a sweater, and people are already offering karmic balancing gifts for any draw I might do... though I know that really, nobody cares about that right now.  If you're like me, you're too busy being grateful that you're not a mother in Port au Prince right now.