Alan Dart and Haitian Ada-the toy he disegned for use in Haitian Relief Efforts.

I am so very excited...shortly after the earthquake that hit Haiti, I was talking with my husband about what could I do to help the relief efforts.  He said well pull out some yarn and needles or hook and work on something.  I really wanted to use a toy pattern but wasn't sure which one.  I have loved Alan Dart's designs ever since I first start buying Simply Knitting. Alan is their toy designer.

So I emailed Alan, asking if he would be interested in designing something that could be used for raising money or even to send to the children later on.  I have seen the benefits of a child who has gone throuhg a traumatic experience through the Victim Services Teddy Bear program her in Edmonton.  Nothing is comforting to a child tahtn to receive a teddy whne dealing with something traumatic.

So I heard from Alan yesterday, he had finished his committment ot Simply Knitting early, he had a deadline if January 22, 2010 to submit his design.and then he would work on this design, in fact he had been researching an animal native to Haiti, called Hispaniolan Solenodon (pictured below) 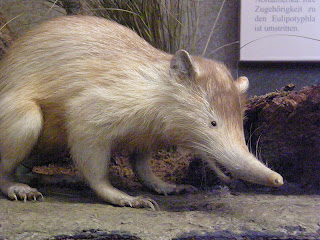 So here is Haitian Ada who will be released on February 1st, 2010 on Alan's website, http://www.alandart.co.uk/pages/products, also Carol of Knitting, Beads and other things has a kit available on her website as well.  Ada is a free pattern download available directly from Alan Dart at www.alandart.co.uk. $1.00 USD of Ada in a Bag's proceeds will be donated to the Red Cross Haitian Relief Fund. Our price: $17.99 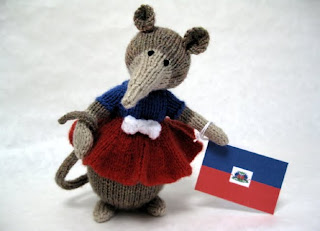 Here is a picture of the finished design.  So please donate the amount that you would have paid for the pattern (Alan usually charges £2.50 for his downloads, this works to approximately $5.00 CAD) for Haitian Relief Efforts.  Also think of purchasing the knitting kit from Carol so that she will be able to donate to Haitian relief.  Carol's kits are wonderful and the service is great.