I am fuming! I came across this article on Facebook this morning at around 7:53 am.


The Active Shooters training started at 5:30 am. This was the first I had heard about it. EPS is doing the training in the following areas:


I understand that the training needs to be done but we also need to look at who is in the community. We have the homeless that use services in the downtown core near Rogers Place as well as close to City Hall. there are a numer of office towers in the area, as well as a City Centre Mall.

Also a lot of refugees have made their homes in the communities surround the areas that have the train happening. Most of these refugees have come from war torn countries, so often they are dealing with PTSD and other issues stemming from being in war. 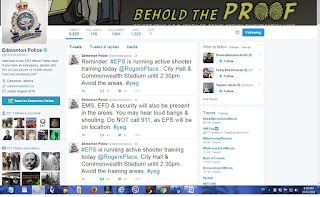 Not alot of warning, with the first post being at 5:00 am. They ask that you do not call 911 however not everyone is on social media. Global did a story but it actually wasn't on the morning news when I turned it on at 7 (when I woke up).

Ok, I get City Hall, I don't understand why Commonwealth Stadium or Rogers Place. If we have an active shooter in the city, it would make sense to protect the Alberta Legislature or Refinery Row, especially if terror related. Even City Centre Mall makes sense as it is accessible to the public.

I will be writing a letter to the Police Commission as to voice my concerns on this and how it has been approached.