whatever you call them...I love this style of doll. I have seen some very tradition ones and some really fun and cute ones. A matryoshka doll is a Russian nesting doll (Russian: Матрёшка) which is a set of wooden dolls of decreasing size placed one inside the other. They are also found in Ukraine.


Here are some interesting designs I found on the wiki.....


A set of matryoshkas consists of a wooden figure which separates, top from bottom, to reveal a smaller figure of the same sort inside, which has, in turn, another figure inside of it, and so on. The number of nested figures is traditionally at least five, but can be much more, up to several dozen with sufficiently fine craftsmanship. Modern dolls often yield an odd number of figures but this is not an absolute rule; the original Zvyozdochkin set, for instance, had an even number. The form is approximately cylindrical, with a rounded top for the head, tapering toward the bottom, with little or no protruding features; the dolls have no hands (except those that are painted). Traditionally the outer layer is a woman, dressed in a sarafan. The figures inside may be of either gender; the smallest, innermost doll is typically a baby lathed from a single small piece of wood (and hence non-opening). The artistry is in the painting of each doll, which can be extremely elaborate.

They are traditional made of wool but I have found some that are knit or crocheted.

I thought this was cute and made from Susan's pattern.

Here are some other patterns that are available, they are not dolls but they are the same idea :)

Found in Make Me a Monster: A Mish-Mash of Monstercraft 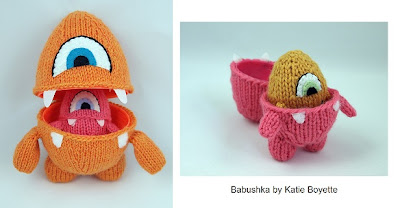 Babushka are nesting monsters made with plastic eggs!

Being nesting monsters has so many advantages. Not only does carrying your children in
your mouth make it easier to keep up with them, but it makes many activities much more
affordable. The entire Babushka family can go on vacation for the price of one plane
ticket. They also pay the admission price for one at movies and amusement parks. The
Babushkas practically put the local Chinese buffet out of business, paying for one, but
eating for three, or even ten when the extended family comes along. Being a hollow
monster means being perpetually hungry. 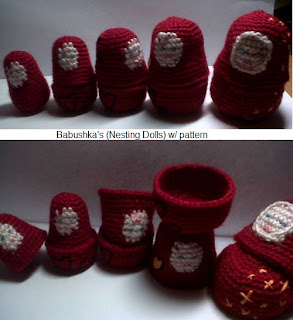 There are some on Ravelry that do not nest. I did a search of them. Babushka's