So I got a request on Ravelry to pass on a pattern, which I had paid for.

I was non committal and said I needed to find out what was going on. As you know I had purchased the Angry Birds crochet patterns and I have been slowly working on the set. I actually have three done: The Cardinal, The Goldfinch and The Blue Bird. I am halfway done the The Bomb Bird (its all the black yarn) then need to crochet the Green Bird and the White Bird, with its own egg. Then, last is the pig. Hubby loves the birds and still plays the games.

So lastnight, after a long day at work I got this message:

You’ve probably already had several questions like mine, but as I’ve look all around the net, there are not much options left than to send you a message.

It’s about the angry bird patterns…I was half way through crocheting them, when the patterns were discontinued! I only bought the red bird and the green pig and was gifted the white and black bird (not finished yet). So I don’t have the goldfinch and bluebird.

Would you mind to share the pattern with me? So I can complete my collection?

I don’t mind to send you a small gift in return.

Greetings all the way from the Netherlands!


So needless to say I was a bit shocked! Everyone knows my stance on copyrighted material, I simply do not share. The reason being is that designers work hard to do what they do. I have learned a lot about copyright from Alan Dart, Pheony Knits and other designers that they lose payment for designs etc. It is not a win win situation at all!

So I gave a non-committal response back:

Let me talk with the designer and find out what is going on.

So this is what is happening...saw this post on Karla's blog, Itsy Bitsy Spider. It is the second post on her blog.


The end of the Angry Birds 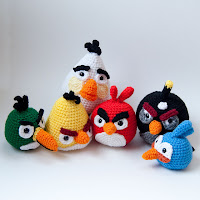 It was a lot of fun while it lasted. I got to know people from all over the world and I got to share my patterns in a way that made people happy. But it's over.

On Tuesday, I was asked to stop selling the Angry Birds patterns. I cannot get into the details, but suffice it to say that I stand to lose more than just my business if I continue.

The patterns have been pulled from Etsy and pattern sales have been deactivated on Ravelry. They will not be re-listed or re-activated.

I will continue to sell my other original patterns in both venues and I have some new designs that should be released very soon. I am truly sorry to everyone who did not get the opportunity to get copies of the patterns.

Thank you for your support and understanding.

More recently, I have had wranglings with the BBC, after they served me with a C&D for sharing free patterns based on characters from the TV show, Doctor Who. This became an international news story, during which Russell T Davis - a huge driving force in bringing Doctor Who back to our screens as well as being the producer and writer of many episodes - was said to have very much liked the patterns I created. Further developments have led to me being in talks with the BBC, and I hope the end result will be the re-release of these patterns, fully endorsed.

Following on from the news story, I was offered a great deal of work, including guest patterns in printed publications, and also a whole pull-out supplement which the Guardian produced, known as the Rebel Knitters Guide.

For now, however, things are fairly quiet on the knitting front, and I am taking time to enjoy projects for myself, and my friends and family. I post these up on Ravelry, which is a kind of Facebook for knitters and crocheters. I highly recommend this site if you do knit.

So there you have it, two designers hit wit a cease and desist order on the designs. Mazzmatazz's were free, Karla's were not but they were reasonably priced and Karla was using the extra cash for her daughter's medical care, which isn't cheap in the USA. Oh and to add insult to injury for Karla on the Angry Bird Facebook Page they have an album for Angry Birds Fan Art. In fact the green crocheted pig that is picture in this album is Karla's design!

What a sad day!