It was about a little dachshund that was surrendered to a kill shelter in Florida. It was on the Dachshund Rescue South Florida on Facebook.

Yesterday afternoon A1340518 found himself given away by his family when he needed them most, alone in a cage at a shelter, having lost the use of his back legs, had less than 4 hours to live, and needed a miracle.  One of the best things about rescue is that miracles can and do happen, and when they do happen, they happen quickly, and in a way that is humbling for even the most seasoned team as DRSF.

Our executive team could not fathom a way that we could gather the resources to help this little boy in less than 4 hours, but decided to put out a"hail Mary" pass to our community, and as always, you did not fail us.  Within seconds, funds started coming in, and fosters started to come forward who had the knowledge and experience to give this little guy every possible chance to have the life he deserves.

Our initial note went out at 1:30 yesterday and within an hour, and thanks to our amazing community, we had a comfort level that we could raise the resources we needed to help him.  The shelter was called and told we were on our way, Dr. Wong was ready and waiting for us, and Regina was on her way to pick him up.
He arrived at Southeast Vet Neurology with no deep pain sensation and was scheduled for blood-work, a meylogram, and then was headed to surgery.  Given his condition, he was given a 50% chance of walking again, 40% chance of not walking, and a 10% chance that he would develop meylomelasia.

We all held our breath and waited for an update.  Dr. Wong completed the surgery at 1:45 AM; the compression was easily removed, but his spinal column was badly bruised which is symptomatic of an injury.  As of this AM, our little boy was resting comfortably and is pain free, although not yet responding to pain sensation.  He is by no means out of the woods as he has a long road ahead of him, but he is safe, loved, and we can only hope somehow knows how many people are thinking of him.

DRSF Foster Dad Sady had a wonderful suggestion for a name for him, and A1340518 will now be known as Laz, from Lazarus, who walked from his own death.  We have raised about half of the $2,500 needed for Laz' surgery and will be posting the names of all those who have contributed this afternoon on the DRSF Page.  Thank you to all those who have contributed in time, transport, skills, love, prayers, and donations for this little boy and it is only thanks to our community that we are able to make miracles happen.

If anyone can help please visit Dachshund Rescue South Florida and let them know. There is a big time committeemen while Taz recovers from surgery. I am not in anyway affiliated with the group just passing on the information.

It is with a heavy heart I let you know that he passed away this afternoon.

An Angel Makes A Gentle Crossing

It is with a heavy heart that DRSF shares that Laz gently crossed the bridge this afternoon, wrapped in a warm blanket, with his head on a pillow, receiving love and kisses from those who had only known him a short time, but for those he had left an indelible imprint on their heart.

Certain dogs come to us in such a way that we have no choice but to believe that they are very dearly needed on the other side of the bridge, as it seems the odds are stacked against them from the very start.  Laz made his way from a certain death at the shelter buoyed by love and generosity from across the county, into the hands of an incredible medical team, only to succumb to a secondary condition that is a rarity, but to have that condition accelerate and overtake his system at a rate that is not often seen.  The universe came in loud and clear….his spirit was needed and there was nothing we could to do to stop it.

All the DRSF dogs hold a special place in our hearts, but those who are with us for the shortest time often burn the brightest as they come to us to not only tell their stories, but to show that there is more kindness, generosity and compassion left in the world than anyone would imagine and the power of love and emotion they bring with them is like a shooting star that is there and then quickly passes, but whose memory is always there.

While we mourn Laz’s passing, we must also remember that he is now free of pain, and we can only hope greeted by those who have gone before him and welcomed by friends he never knew he had, who can share stories of how a lifetime of neglect were erased in a few short days by hands of love, hugs and kisses.

Most importantly, we thank Laz rallying our community and reminding us of the miracles that can be worked and the amazing things that can be accomplished when people come together for any common goal, but most importantly when that goal is to help a little doxie who was down on his luck. 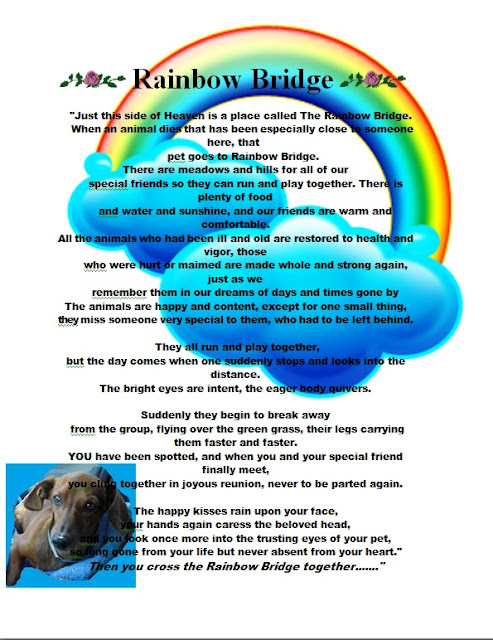 Rest in Peace Taz, I hope to see you one day XOXO